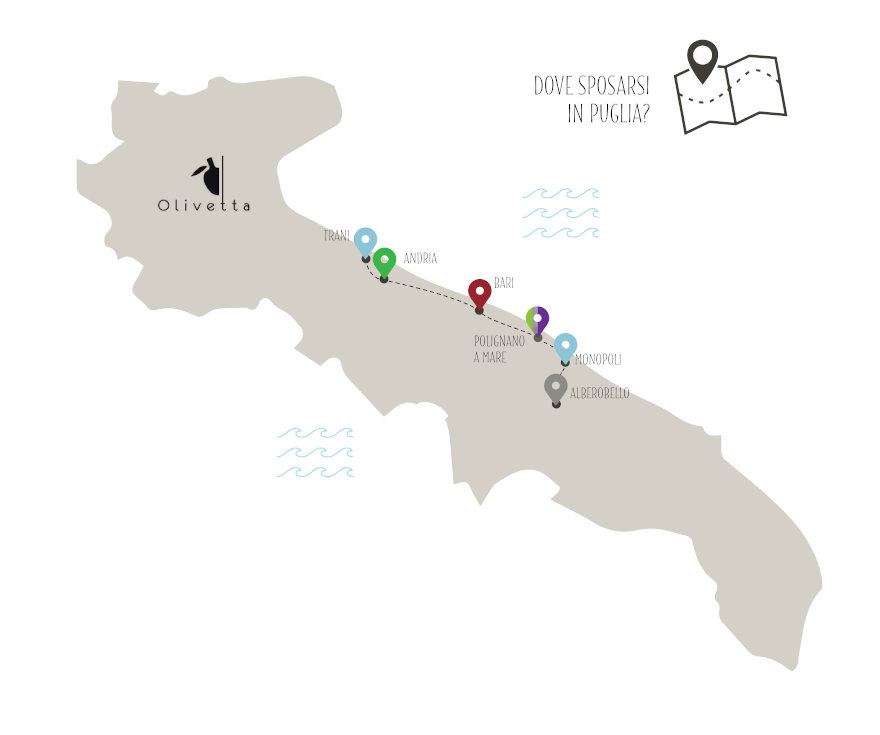 Wedding in Puglia: a tour between some places where you can say "yes"

From Alta Murgia to Valle D’Itria:

a small guidebook to discover places and cities in Puglia where you can celebrate your wedding.

The Wedding in Puglia has always been one of the most important events to celebrate. It can be considered the celebration par excellence, a ritual deeply linked to the history and local and family traditions of the spouses. Apulian weddings are characterised by very long times and rhythms, sumptuous banquets, in the name of abundance, and parties with numerous guests involving the whole family and friends.

The dream and goal of every married couple are to create an unforgettable event able to thrill and amaze all guests as well as satisfy their tastes and desires.

However, whatever the married couple is, the wedding in Puglia still is one of the events more in continuity with the traditions of the territory, and even the new trends in the wedding are very careful to habits and customs of a traditional wedding.

It’s no coincidence that in recent years the most widespread and sought-after style is that of country chic wedding, in the name of country weddings celebrated in a location surrounded by the natural beauties of Puglia and banquets that propose the traditional flavours of the region.

Even if it is an English term, the country chic wedding is one of the most appreciated in Puglia. It is a party entirely inspired by the countryside. It is celebrated in farmhouses or large farms, which have now become worship places of this new type of wedding.

In a country chic wedding, everything speaks of nature. Flower decorations, for example, use wild plants and flowers, such as spontaneous and local herbs. Decorations, instead, use country materials that are traditional of peasant cultures, such as wood, jute, canvas, clay, and hay.

The choice of wedding favours is also part of this style. In particular, the gastronomic ones are the most sough-after are since they are original, handmade, and they reflect the authenticity of the land by containing typical and local food products.

Puglia, however, isn’t just the countryside. The territorial diversification of the region allows married couples to choose locations such as hamlets, Romanesque and Baroque cathedrals, and sea and beaches with an exotic look. It is increasingly common in Puglia to see weddings celebrated on the beach, with a country chic style.

What could be the best places celebrate your wedding? We have prepared a small tour that runs throughout Puglia, connecting each destination with the colour of one of our Olivetta gastronomic wedding favours.

Getting married in Puglia: some of the most beautiful and evocative places for a country chic wedding 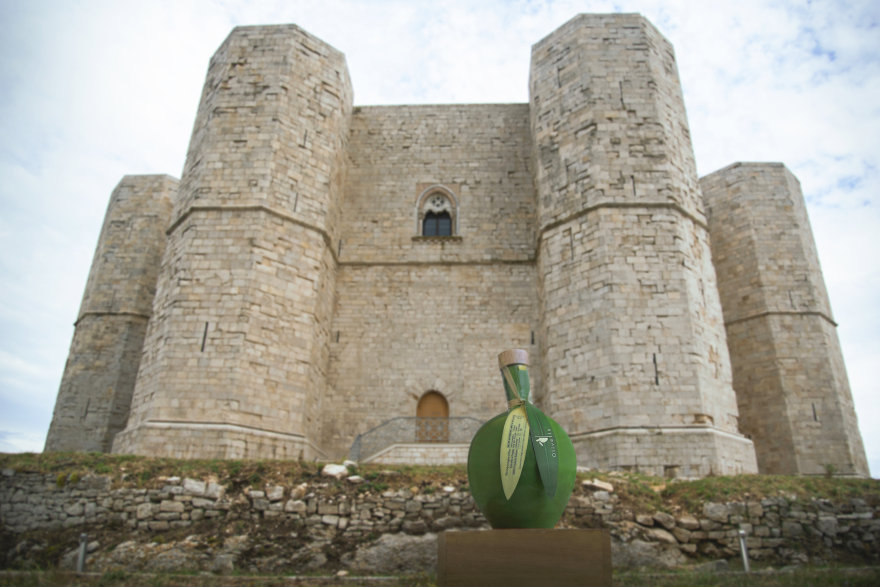 Getting married in Castel del Monte and in Andria

Universally known for its octagonal shape, Castel del Monte, a World Heritage Site since 1996, is one of the most renowned symbols of Puglia. It stands on the top of a hill 504 meters high located in the Murge plateau in the territory of the city of Andria.

Its dominant and imperious position has contributed to making Castel del Monte a perfect setting immersed in the Apulian nature. In its surroundings, there are numerous structures where you can celebrate your wedding. But mostly they are ancient farmhouses and farms surrounded by an immense expanse of olive trees, almond trees and vineyards with the geometric and rectilinear shape of the Castle in the background.

The emerald green Olivetta Classic well reflects the landscape and setting of Castel del Monte. This intense shade of green is similar to that which can be observed in the Apulian nature that surrounds the Castle, in the thick oak woods Roverella, Leccio, and Fragno. 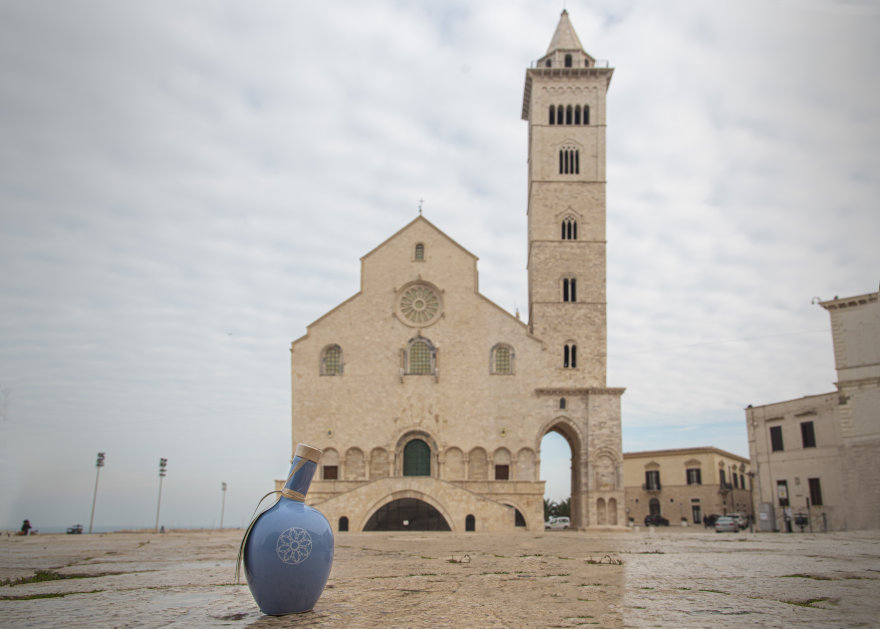 The Cathedral Basilica of Trani is one of the best-known examples of the Apulian Romanesque architectural style. It was built between the first two centuries of the year 1000, entirely in Trani stone, a limestone tuff typical of the area surrounding the city.

Also known as the Cathedral on the Sea for its suggestive position near the port, this church is one of the most popular and sought-after for those who desire to celebrate their wedding with a religious and original ceremony.

Its proximity to the sea makes the Cathedral Basilica of Trani a perfect place for religious ceremonies before and photo shoots after. The Cathedral and the Bell Tower with the sea in the background create a romantic setting like few.

Some spouses who celebrated the wedding in the Cathedral chose as wedding favour the sugar paper Olivetta De Lux. A colour with very light blue shades that perfectly recalls the colours of the sea that brushes the coast where the church stands. 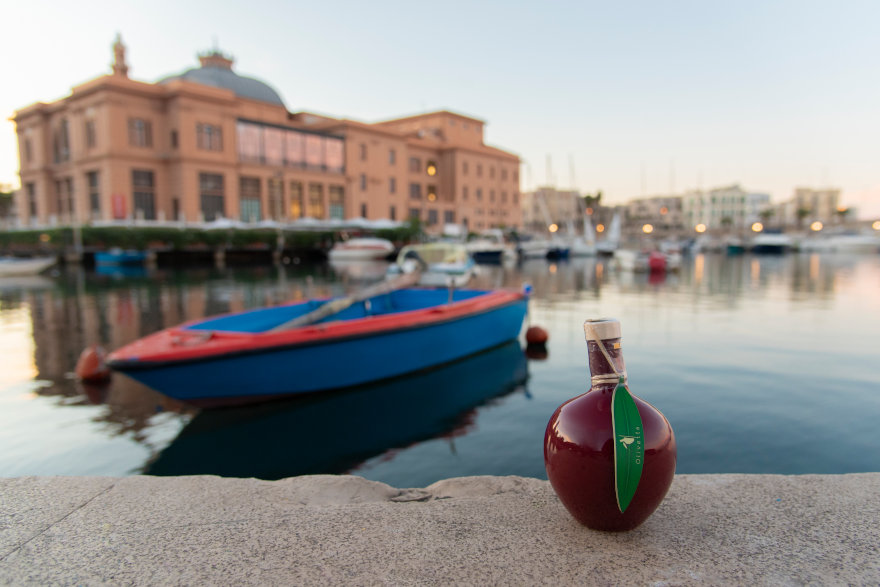 Getting married in Bari, the regional capital

Even Bari, the regional capital, can be a fascinating place to say "yes".  The city embodies all the best features of Puglia: the historic centre of Bari Vecchia, the art of Romanesque churches and cathedrals, the strong culinary traditions and the sea to which the people of Bari and tourists are most linked.

Getting married in Bari means celebrating the ceremony in the churches located in the maze of streets and arches of the old city, then looking out over the sea for photos, an aperitif or a real party in a restaurant on the coast or directly on the beach.

For the spouses who decide to get married in the city of Bari, we suggest the Bordeaux Olivetta Classic, inspired by the dense shades of red that you can admire in the sky during summer sunsets. 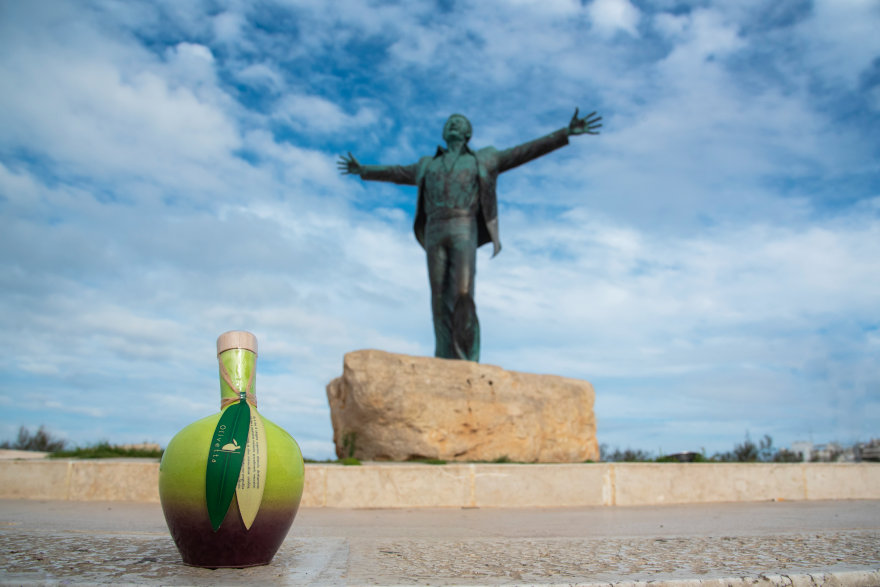 Getting married in Polignano a Mare, the city of Domenico Modugno.

From a simple fisher place, Polignano a Mare has become one of the most popular destinations of the Apulian summer.

Its characteristic old town overhanging the sea is already a famous worldwide postcard of Puglia, as is the statue of the well-known Domenico Modugno who was born in Polignano a Mare in 1928.

The success of Polignano a Mare as a wedding location was born from the example of some Italian and international celebrities who chose to say yes in Polignano.  Today is one of the most chosen and popular cities for a wedding ceremony, both for its extraordinary dining locations overlooking the sea and for its ancient farmhouses in the hinterland.

Imagine getting married in the wonderful Polignano a Mare and giving to your guests the Olivetta Classic Nature, the wedding favour symbol of our collection as it is decorated with the shaded colours of the oil and olives. 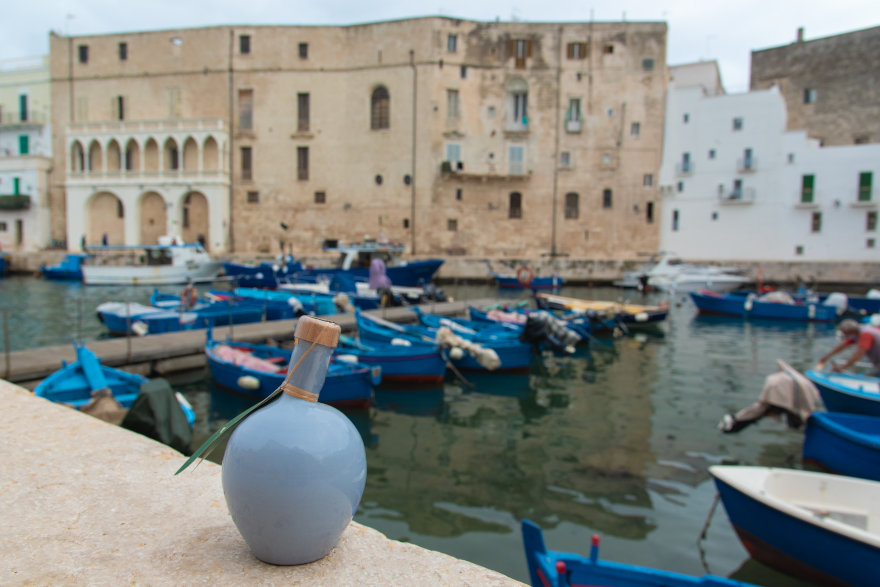 Getting married in Monopoli

A few kilometres from Polignano a Mare there is another tourist centre laid down on the coast of the Adriatic Sea: Monopoli. During summer, also Monopoli is a popular destination for the beauty of its sea and its beaches.

The old town keeps the real treasures of religious architecture, such as the majestic Co-Cathedral of the Madonna Della Madia, all decorated inside with gorgeous Neapolitan marbles, and a refined small port near the Castle of Charles V with many blue boats moored.

The city of Monopoli is a perfect location for those who desire to celebrate their wedding on the beach or by the seaside. From the civil ceremony to the party, the spouses can realize the dream of a ceremony with the sea in the background.

In perfect harmony with the crystal-clear sea of Monopoli is the sugar paper Olivetta Classic. A perfect wedding favour to give to your guests for a wedding celebrated on the beach. 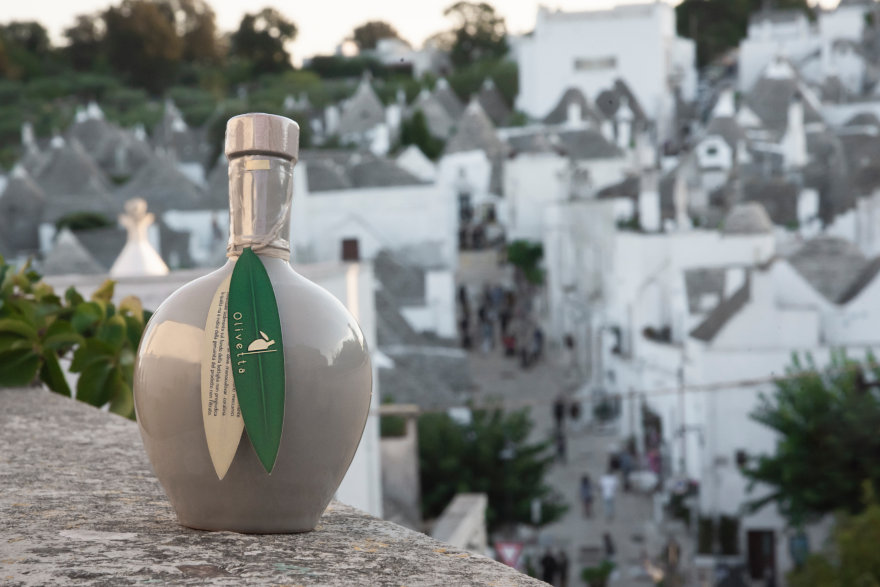 Getting married in Alberobello, the city of Trulli

Moving from the coast, the southern hinterland of Monopoli holds a real cultural and architectural jewel: Alberobello.

Declared a World Heritage Site in 1996, Alberobello is a rural settlement entirely made up of Trulli, a conical dry-stone construction typical of Puglia, perfectly preserved.

Alberobello is a special location for celebrating your wedding. The Trulli, in the village and in the ancient farms, perfectly express the idea and style of a country chic wedding inspired by the rural and natural atmospheres of the Apulian countryside. 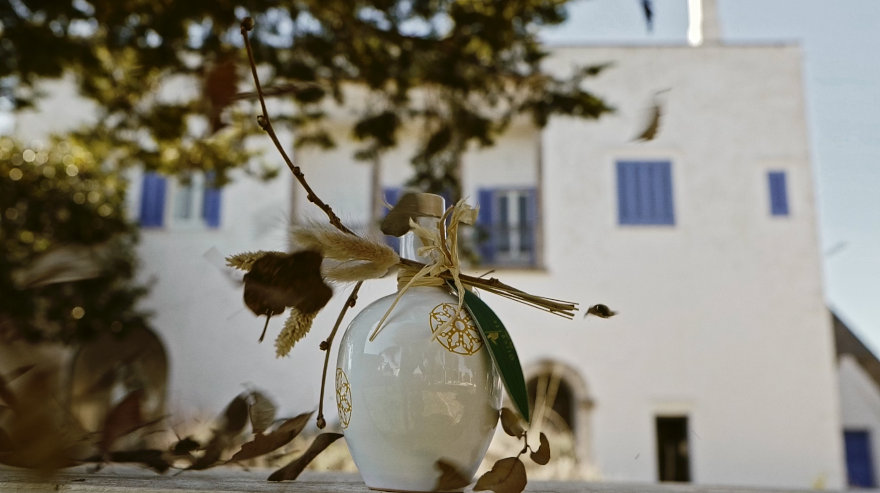 With Locorotondo, Martina Franca and Ostuni, Alberobello is one of the most famous and visited towns in the Itria Valley. A territory of red earth, centuries-old olive trees and all-white houses where stories, traditions and landscapes of the Apulian provinces of Bari, Brindisi and Taranto meet.

If you’re planning your wedding in Alberobello or in the Itria Valley, the Olivetta Classic is perfect for these locations, the dove-grey one similar to the colour of the roofs and spires of the Trulli.

Following this itinerary, those who dream about a country chic wedding, in Puglia will find many places to organize a ceremony that reflects their tastes. From the hinterland to the coast, from the historical and architectural beauties to immense expanses of olives, in Puglia history, nature and tradition are a constant setting for unforgettable weddings.

In this context, the gastronomic wedding favour finds its place because it is artisanal, authentic, original, and handmade as tradition, as well as preserving ancient flavours such as wine and oil.

The three collections of the Olivetta gastronomic favour, the Classic, Elisir, and De Lux ones, have been designed to match with country chic parties and respond to the tastes of the spouses and wedding decorations, through a wide range of colours that reflect the colours of nature. 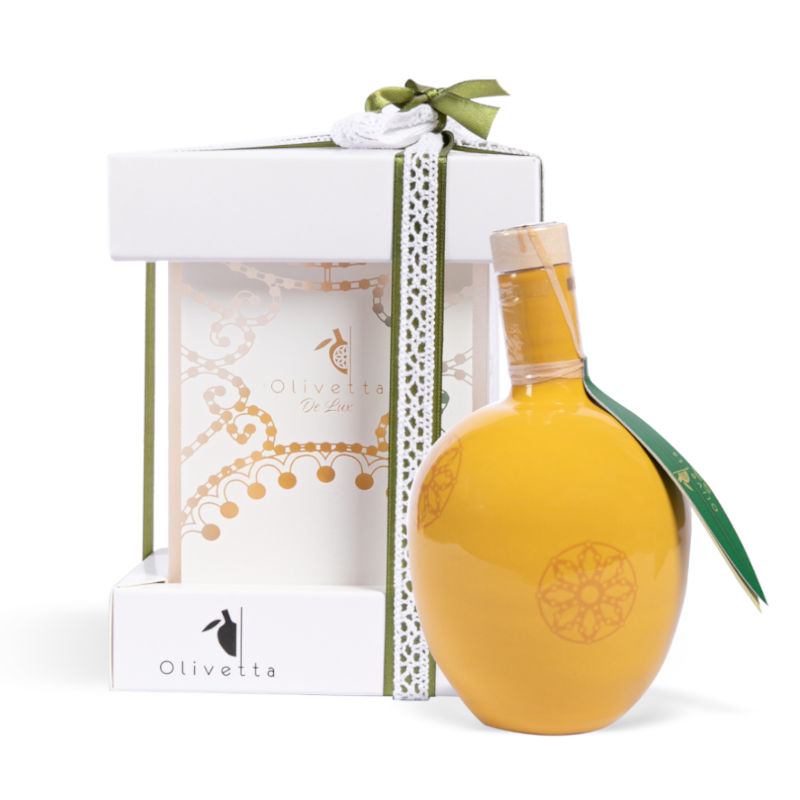 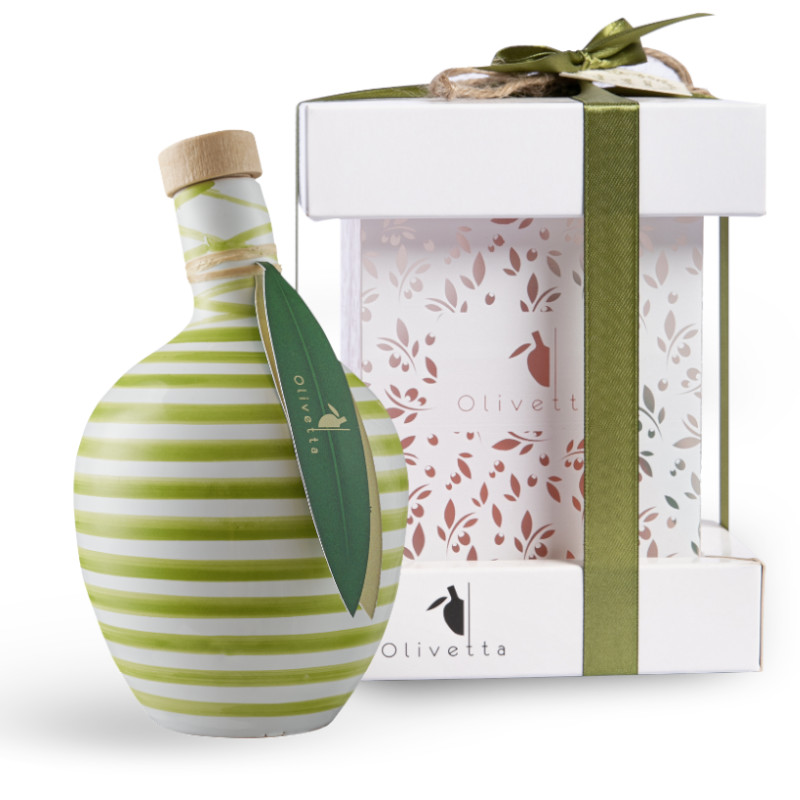 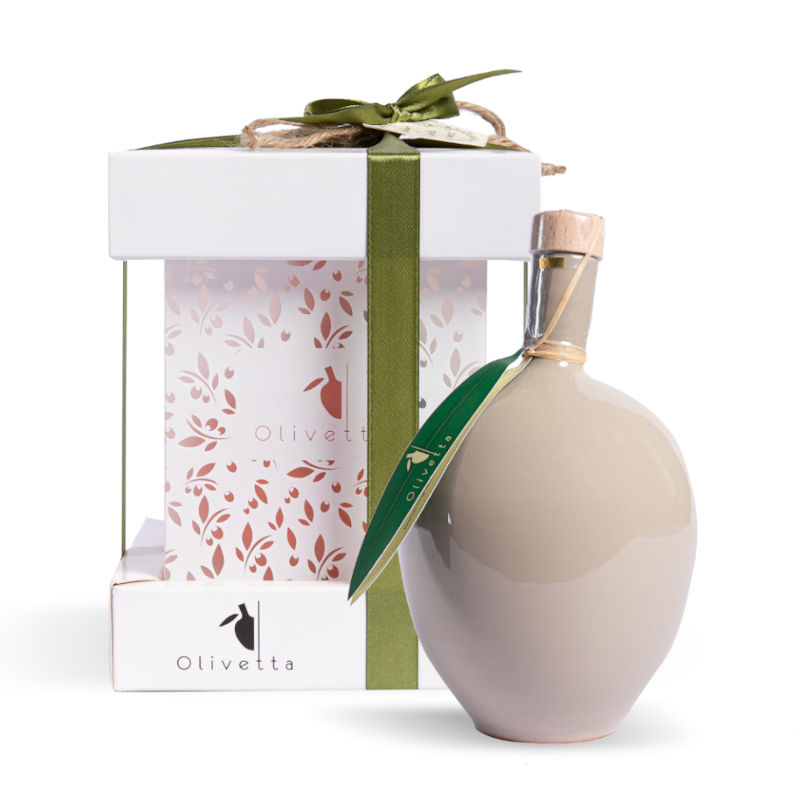 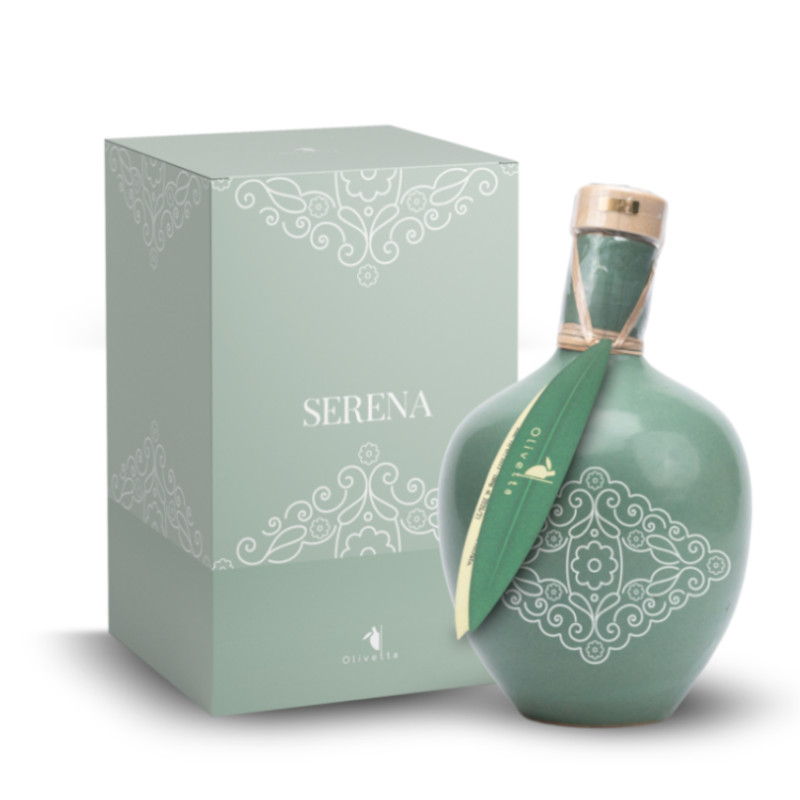 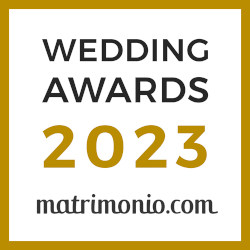 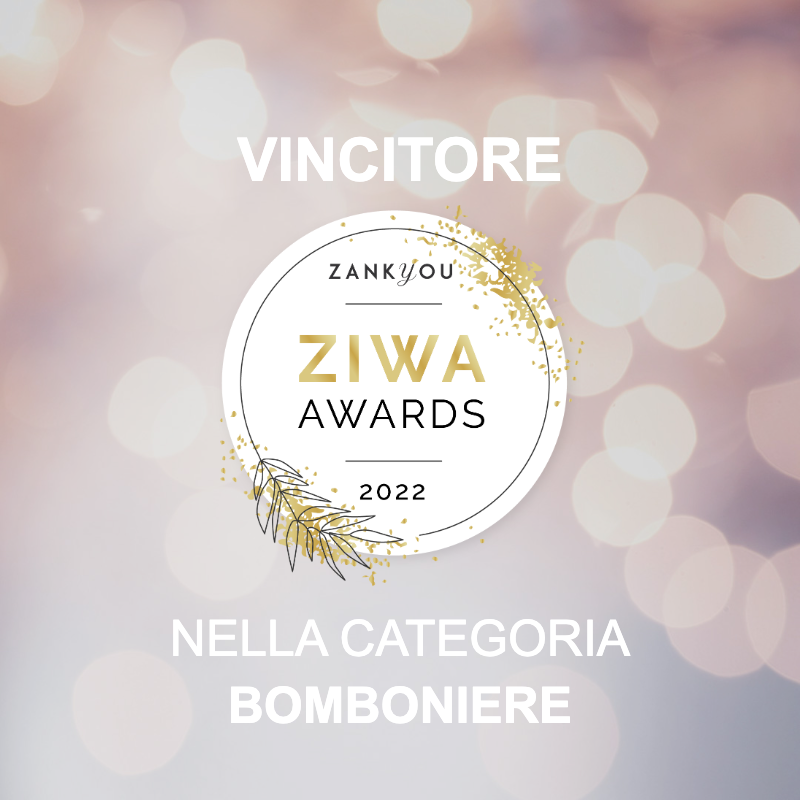 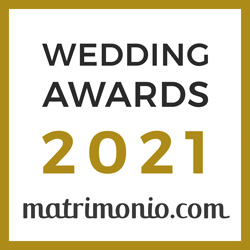